Grand Turk Named Among The World’s Top Cruise Destinations, Based On Consumer Reviews 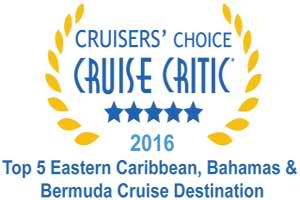 Cruise Critic®, the world’s leading cruise reviews site and online cruise community, has announced the winners of its first-ever Cruisers’ Choice Destination Awards, naming the top cruise destinations in the world, based on consumer ratings submitted with reviews on the Cruise Critic website. The awards name award-winning destinations across 15 regions, worldwide.

JamieInWyoming, a Cruise Critic reviewer, gave a glowing review on her stop at Grand Turk stating, “We did not want to leave… The water at Grand Turk is warm and crystal clear. We might have been the last people back on the ship, because I was too busy asking the locals about living expenses and taxes. I want to retire there.”

According to a recent survey by Cruise Critic, selecting a cruise destination is the most important part of the planning process for both first-time cruisers (28%) and experienced cruisers (29%).

“Cruising offers the unique opportunity to sample a number of destinations at once,” explains Colleen McDaniel, Senior Executive Editor of Cruise Critic. “Because of that, it’s important to carefully select your itinerary so that you’re able to make the most of your time in port. With so many available options, this list of destinations personally recommended by cruisers themselves provides invaluable insight into the cruise destinations across the world to help cruisers choose the best options.”

River cruise port cities were the top-rated category as a whole, with all of the top five destinations receiving the highest marks across the board. Paris was rated the best river cruise destination, with reviewers naming the city’s beauty, museums and gardens as particularly impressive.

As for the best cruise destination in North America, San Francisco was named to the top of the list in the U.S. & Canada category.

First-place winners in each category include:

Cruise Critic boasts the world’s largest online cruise community, with more than 160,000 cruise reviews, covering approximately 500 cruise ships and over 300 worldwide ports. Awards are based on reviews submitted for cruises taken over the past year.

BREAKING NEWS: Travelling to the Turks and Caicos made easier!

The Turks and Caicos Islands Government has announced its updated  entry requirements and effective May 1st 2022, the protocol is as follows: All Visitors 18

Turks and Caicos’s Updates Entry Protocol for All Arriving Passengers